In 1956 Elvis Presley started his reign of the Billboard Charts with Heartbreak Hotel, the US went all in with testing nuclear bombs on the Bikini Atoll, the Middle East was caught up in the Suez Crises … and the uber-cool Hotel Valley Ho opened in Scottsdale Arizona. It had a glamorous mid century interior design totally on trend for the time. After an $80 million revamp in 2005, this restored landmark mid century modern hotel is once again a trendy hotspot. This mid century modern hotel has a copy of Dwell in the room for your reading pleasure.

What Is Mid Century Modern Design?

Mid century modern design refers to the aesthetic that was prevalent after the end of World War 2 and through the 1950’s and 1960’s.  It’s the Mad Men era where people smoked like chimneys, sexism was rampant and cocktail culture made functional alcoholics look stylish. The term was coined by an author in 1984.

Many of the ideas we value now sprang from mid century modern design – clean simple lines, open plan living, large windows and blurring the lines between the inside and outside. The boxy new homes that sprang up after World War II were perfect for casual living. And, they oozed an optimistic colorful exuberance. To be fair, it is sunny in Scottsdale for most of the year.

Mid century modern colors ranged from the brights of the 1950’s to the earthy tones of the 1960’s. The kitschy colors we associate from the 1950’s (turquoise, pinks, oranges, and yellows) were grounded with sophisticated dark grey or black.  These showy colors showed off American optimism in a bright future and was a marked departure from the drab war years. Democracy and capitalism had won the day and the mood was positive. Be retro cool not kitsch! In the 1950’s a room full of vibrant color was acceptable.  To  update this look for today, make sure your bright colors are grounded on a neutral background like grey. The Hotel Valley Ho is a landmark mid century modern hotel which has been returned to its former glory. Check out how an expert design team refreshed the mid century modern interior design so that it’s totally current for today’s trendy crowd.

Strip things down to their bare form and let function dictate how things look. City living meant that homes were smaller and boxier. The new mid century modern aesthetic worked well with these smaller homes. Floor lamps were either straight and geometric or curved. Bar carts were all the rage because it was one long cocktail party. Pendants and floor lamps were used to raise the eye upward and add height to a Midcentury modern interior because so much of the furniture was low-lying. A modern take on the Flos Arco lamp designed by Achille Castiglioni in 1962. It’s All About The Materials

When you have less adornment and fuss, then the natural focus shifts to the materials used for an object.  Mid-century modern design loved both natural materials like wood, leather, metal and man-made materials. On the other hand, plastic was used for its own sake – to show a cool new material instead of pretending it was wood. Designers worked with new materials that had been developed during the war such as resins, laminates, chrome, fibreglass and synthetic fabrics.

Avoid too many patterns. Out with the florals and in with geometric patterns, graphic prints and ethnic prints. Think of a Scandinavian sensibility. Blue and gold with sculptural artwork for a midcentury modern interior

We are talking atomic shapes and starburst patterns for products made out of the new space age materials like plexiglass. After having visited Hiroshima in Japan, I can’t imagine why anyone would think atomic energy was cool but back then, people weren’t thinking of nuclear annihilation at the touch of a button. The Sputnik Chandelier had its heyday and was named for the first ever satellite launched into space (by the Russians in 1957). 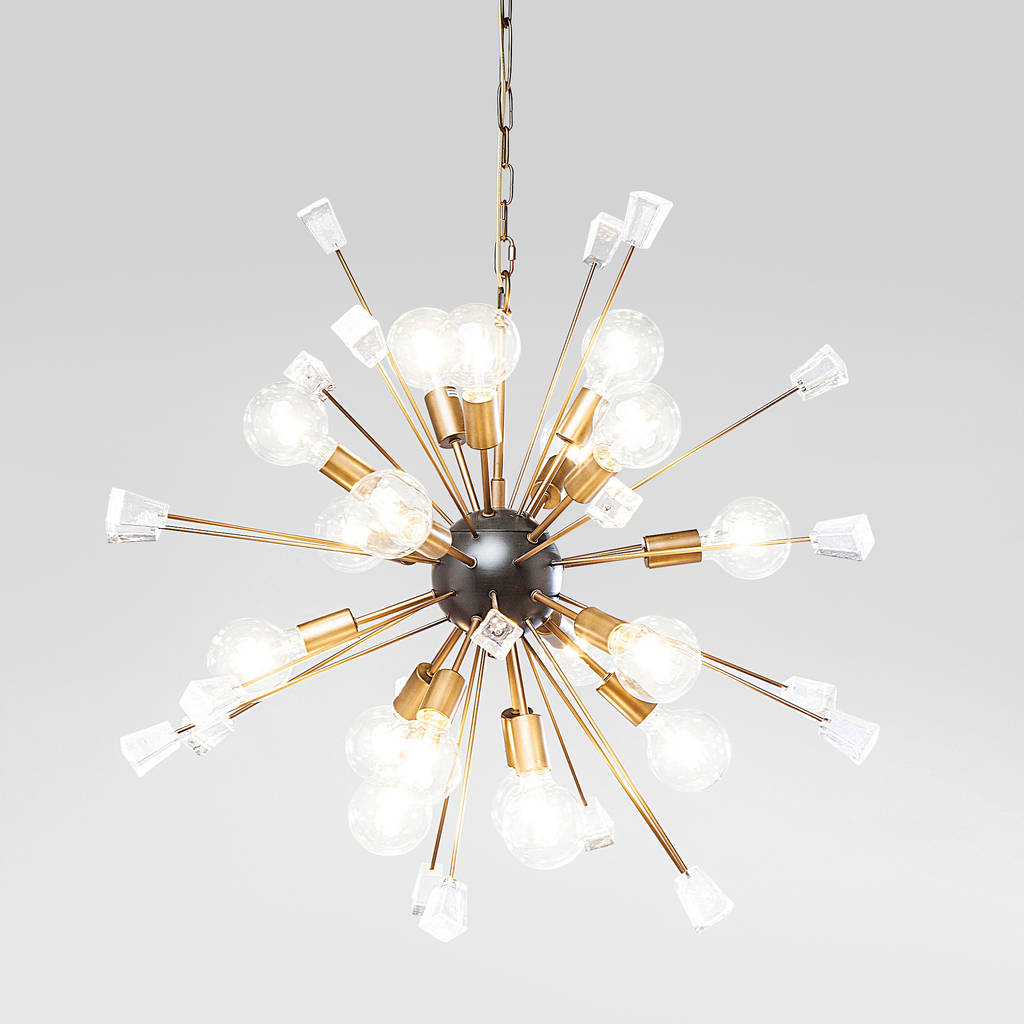 Can’t afford the eye-watering prices of original pieces of mid century modern home design? Luckily there are some great replicas on the market.

Spread The Word! Pin this to your Pinterest Boards for future reference!